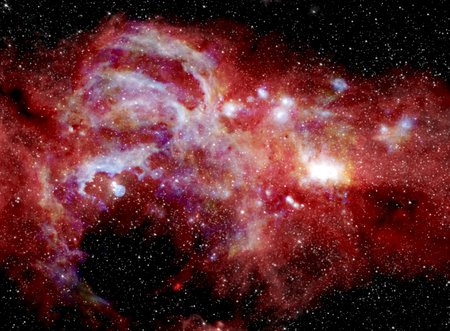 Composite infrared image of the inner approximately 75 light-years of our Milky Way galaxy. New data from SOFIA taken at 25 and 37 microns are shown in blue and green, and combined with data from the Herschel Space Observatory, shown in red (70 microns), and the Spitzer Space Telescope, shown in white (4.5 microns). Credit: NASA/SOFIA/JPL-Caltech/ESA/Herschel

Composite infrared image of the center of our Milky Way galaxy. This image spans more than 600 light-years across and is helping scientists learn how many massive stars are forming in our galaxy's center. New data from SOFIA taken at 25 and 37 microns shown in blue and green, is combined with data from the Herschel Space Observatory shown in red (70 microns) and the Spitzer Space Telescope shown in white (8 microns). SOFIA's view reveals dusty features in unprecedented detail. Credit: NASA/SOFIA/JPL-Caltech/ESA/Herschel

Composite infrared image of the inner approximately 75 light-years of our Milky Way galaxy. New data from SOFIA taken at 25 and 37 microns are shown in blue and green, and combined with data from the Herschel Space Observatory, shown in red (70 microns), and the Spitzer Space Telescope, shown in white (4.5 microns). Credit: NASA/SOFIA/JPL-Caltech/ESA/Herschel
Tags:
instrumentation, astronomy & physics, Instrumentation

A new panoramic image based on data captured by NASA's Stratospheric Observatory for Infrared Astronomy (SOFIA) shows the bustling center of our galaxy like it has never been seen before.

SOFIA is an airborne observatory that flies up into the lower regions of the stratosphere, about 40,000 feet above Earth, to capture infrared images of the cosmos. At these heights, the flying telescope can bypass a portion of Earth's atmosphere that blocks a significant amount of infrared light.

From July 1 to July 11 of 2019, researchers led by Matt Hankins, a postdoctoral scholar at Caltech, took SOFIA on several flights to capture new infrared views of the brightest portions of the center of our galaxy. Previous infrared telescopes were unable to capture these regions because the intense brightness led to overexposed images. Unlike those telescopes, SOFIA can take short exposures, reducing the chances of oversaturation.

"We are filling in the most active star-forming regions of the galactic center that were missing in previous images," says Hankins, principal investigator of the program to observe the galactic center with SOFIA's FORCAST (Faint Object Infrared Camera for the SOFIA Telescope) instrument. Hankins works in the group of Mansi Kasliwal (MS '07, PhD '11), assistant professor of astronomy at Caltech.

Hankins rode on SOFIA for a total of eight observing runs. During the flights, he monitored incoming data to make sure they looked as expected. Because winds and other factors can impact the length of each flight leg, last-minute adjustments to the observing plan can be necessary.

"That's the nature of the beast of having a flying observatory," he says. "When the mission director says the plane has to turn to focus on the next target, you have to move on. The whole operation is highly choreographed and planned down to the second, but last-minute changes can still occur."

The new panoramic image shows SOFIA data taken at mid-infrared wavelengths of 25 and 37 microns (colored green and blue, respectively) overlaid on previous imagery taken by the Herschel Space Observatory, a European infrared mission that shut down in 2013, and by NASA's Spitzer Space Telescope, an infrared mission scheduled to be decommissioned on January 30, 2020.

The SOFIA maps reveal dust that has been heated by many of the most massive stars in the region, including some that are up to 100 times as massive as our sun. Several of these dust features had not been fully resolved in previous infrared maps, so the new maps allow researchers to study these bright sources at a level of detail not possible before.

"We still don't understand how massive stars form in this incredibly dense region of our galaxy," says Hankins. "While the galactic center has numerous massive stars that are seen in the SOFIA maps, theory suggests the region should have many more stars than are presently known. Examining this discrepancy is an important aim of our study."

Hankins also says that this galactic map will serve as a guide for NASA's upcoming James Webb Space Telescope (JWST), scheduled to launch in 2021. "Planning JWST observations of infrared light in this region will be very difficult without the SOFIA data. These maps will be crucial for studying young, massive stars in the center of our galaxy in the JWST era," he says.

An overview paper highlighting the initial results has been submitted for publication to The Astrophysical Journal. The full calibrated data set is currently available to astronomers worldwide for further research via the SOFIA Legacy Program.

SOFIA is a Boeing 747SP jetliner modified to carry a 106-inch diameter telescope. It is a joint project of NASA and the German Aerospace Center (DLR). NASA's Ames Research Center in California's Silicon Valley manages the SOFIA program, science, and mission operations in cooperation with the Universities Space Research Association headquartered in Columbia, Maryland, and the German SOFIA Institute (DSI) at the University of Stuttgart. The aircraft is maintained and operated from NASA's Armstrong Flight Research Center Building 703, in Palmdale, California.