The Mathematics of Flow 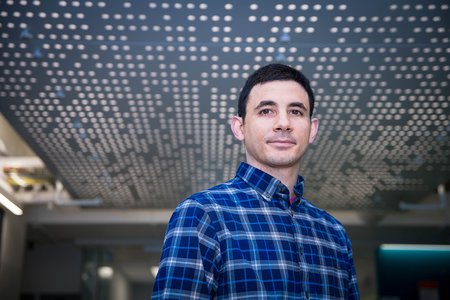 The ways in which water meanders through rivers or makes its way through pipes to your kitchen sink is much more complex than you might think. Mathematicians have been trying to model the flow of water and air for centuries in a field known as fluid dynamics, but according to Philip Isett, a new assistant professor of mathematics at Caltech, the problem is incredibly challenging.

"Because fluids are ubiquitous in nature, we really have to grapple with understanding them," he says. "Fluids are hard to describe inherently because they exhibit a very chaotic and erratic kind of motion called turbulence."

Isett received bachelor's degrees in math and economics, with a minor in physics, from the University of Maryland, College Park, in 2008. He earned his PhD in mathematics from Princeton University in 2013. After working at MIT as a C.L.E. Moore Instructor and a National Science Foundation postdoctoral scholar, Isett became an assistant professor at the University of Texas at Austin in 2016. He joined Caltech in 2018, and recently won a Sloan Research Fellowship.

Isett uses partial differential equations to model fluids; in particular, he studies the Euler equations of fluid dynamics, which date back to their namesake, Leonhard Euler (pronounced "Oiler"), an 18th-century Swiss scientist. Recently, Isett solved a problem related to the Euler equations known as the Onsager's conjecture, named after its proposer Lars Onsager, who won the Nobel Prize in Chemistry in 1968.

We met with Isett to learn more about fluid dynamics and his love of math.

What are partial differential equations?

You can take pretty much any branch of physics and there will be some kind of partial differential equation behind it. In quantum physics, there is the Schrödinger equation; in the general theory of relativity, there are the Einstein equations; and in fluid dynamics, the key equations are the Navier-Stokes and the Euler equations, the latter being what I study.

Why are the equations of fluid dynamics important?

The Navier-Stokes fluid dynamics equations [proposed in 1822 by Claude-Louis Navier and George Gabriel Stokes] are very useful in a practical sense for solving problems related to all sorts of things like the weather, or the air flow around the wings of planes, where you are predicting what will happen. But in a purely mathematical sense, there are fundamental questions we do not know how to answer about the Navier-Stokes equations. In particular, we do not know if the equations break down and if solutions become so irregular that we cannot use them to predict the future.

The Euler equations are a special case of Navier-Stokes where there is zero internal friction, or viscosity. They are especially interesting for studying turbulence, because they describe a limiting regime where the internal friction can be ignored. This is a regime where there is a lot of chaotic motion, an example being the turbulence you see in air or water behind a jet or submarine. This turbulence can even happen when you turn on the sink and water comes out very quickly.

What are you trying to learn with the Euler equations?

We are trying to learn about energy dissipation in these systems. The Euler equations describe a scenario where there is no internal friction, so friction is not what is dissipating the energy but rather something else. Lars Onsager proposed in 1949 that there should exist solutions to the Euler equations that would dissipate kinetic energy without friction and that also would have velocity fluctuations and other properties similar to turbulent flow, thereby linking the concepts of frictionless energy dissipation and turbulence. Building on the work of others and previous work of my own, I was able to prove that Onsager's conjecture is true.

What does this mean in a big-picture sense?

Solving this problem has theoretical implications because it shows that the idea of energy dissipation independent of internal friction, which is something theorized to occur, is compatible with the predictions about velocity fluctuations and turbulence. This offers some philosophical assurance that the ideas in turbulence theory don't necessarily contradict each other. But also, hopefully the math used to prove these statements is the kind of math that will be truly useful for doing future analyses of the fluid equations.

What are you working on now?

We are trying to go further than Onsager's conjecture to show that this energy dissipation happens on a local level. There shouldn't be some parts of the fluid where energy is going up and other parts where energy is going down. Energy should be dissipating everywhere. Solving this problem would bring us closer to more realistically describing physical turbulent flow.

I always liked math growing up. I remember when I learned the Pythagorean Theorem. I saw more and more how it was applied to practical problems, for example, to calculate the distance between two points, and I was just so amazed that some person could discover mathematics that could be so useful. I could see that it has a large impact on society.

When people use the word mathematics, they refer to two different things. On the one hand, there is all the math that people have discovered and know and do, and on the other hand, there is the entire universe of mathematics that is yet to be discovered. I picture the math we know as some kind of surface with lots of winding twists and tangles in it that grow as we learn more, while the math that we don't know can be pictured as a higher-dimensional universe containing that surface. The job of a mathematician is to discover this new math we do not know yet.