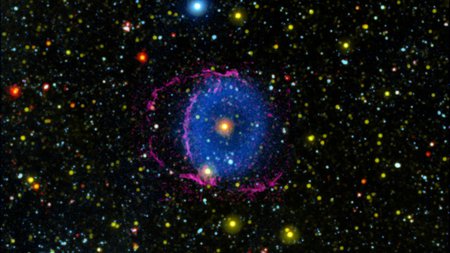 Located 6,300 light-years away in the constellation Hercules, the Blue Ring Nebula is thought to be a short-lived phase after the merger of two stars. As debris from the stellar merger was blown outward, it led to the creation of a shock front, in which hydrogen atoms were excited and induced to glow with visible light, shown in pink. The shock front, and a reverse shock wave moving inward from the shock front, also caused hydrogen molecules (as opposed to atoms) to become excited and glow with ultraviolet light, indicated in blue. Credit: NASA/JPL-Caltech/NASA/JPL-Caltech/M. Seibert (Carnegie Institution for Science)/K. Hoadley (Caltech)/GALEX Team

This animation shows the geometry of the Blue Ring Nebula, which is thought to be the product of two stars merging into one. The collision of the bodies ejected a cloud of hot debris into space. A disk of gas orbiting the larger star cut the cloud in half, creating two cones that are moving away from the star in opposite directions. The base of one cone is moving almost directly toward Earth, while the other is moving almost directly away. Some people see an optical illusion in this animation, in which the transparent cones seem to move away from each other and then back together; in actuality, the cones are fixed and the animation is showing what the nebula would look like if you could travel around it. [high-res version] Credit: NASA/JPL-Caltech/R. Hurt (IPAC)

Located 6,300 light-years away in the constellation Hercules, the Blue Ring Nebula is thought to be a short-lived phase after the merger of two stars. As debris from the stellar merger was blown outward, it led to the creation of a shock front, in which hydrogen atoms were excited and induced to glow with visible light, shown in pink. The shock front, and a reverse shock wave moving inward from the shock front, also caused hydrogen molecules (as opposed to atoms) to become excited and glow with ultraviolet light, indicated in blue. Credit: NASA/JPL-Caltech/NASA/JPL-Caltech/M. Seibert (Carnegie Institution for Science)/K. Hoadley (Caltech)/GALEX Team 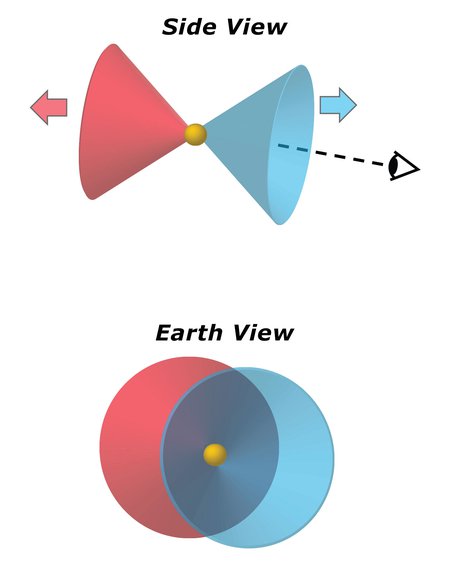 The Blue Ring Nebula consists of two hollow, cone-shaped clouds of debris moving in opposite directions away from the central star. The base of one cone is traveling almost directly toward Earth. As a result, astronomers looking at the nebula see two circles that partially overlap. Credit: Mark Seibert 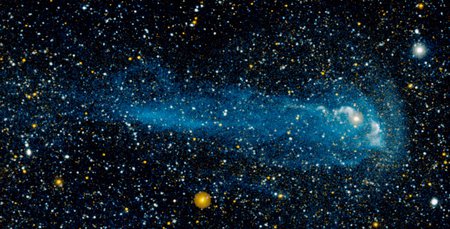 GALEX imaged the star Mira, and its glowing ultraviolet tail, in 2007. The process that creates the glowing ultraviolet light around Mira, in which a shock wave heats up hydrogen gas, is similar to what is happening in the Blue Ring Nebula. Credit: NASA/JPL-Caltech/C. Martin (Caltech)/M. Seibert(OCIW)
Tags:
astronomy & physics

Sixteen years ago, a team of astronomers working for NASA's now-defunct Galaxy Evolution Explorer mission, known as GALEX, spotted a star with an unusual ultraviolet ring around it in images obtained by the space telescope.

The object, which was unlike anything the astronomers had seen before, was nicknamed the Blue Ring Nebula because of its appearance (though its blue color actually represents invisible ultraviolet light that has been intentionally color-coded blue in images). The astronomers spent years scrutinizing the object with other telescopes, both on the ground and in space, and slowly a picture of the star's hidden past began to emerge.

In a new Nature study published online November 18, a team of scientists, including several from the original GALEX team, now offer an explanation for the formation of the blue ring around the star, named TYC 2597-735-1. They make the case that the ring is actually the base of a cone-shaped cloud of fluorescing debris formed after a sun-like star collided into, and engulfed, a smaller stellar companion.

In fact, the scientists say two cones of material were shot out in the collision, in opposite directions. Because one of the cones is pointed directly toward Earth, it appeared to GALEX as a ring.

The event represents the first observation by astronomers of a rare, never-before-seen phase in the evolution of stellar mergers that occurs a few thousand years into the process and is estimated to last roughly thousands to hundreds of thousands of years, a relatively short period on the timescale of cosmic events.

"The merging of two stars is fairly common, but they quickly become obscured by lots of dust as the ejecta from them expands and cools in space, which means we can't see what has actually happened," says lead study author Keri Hoadley, the David and Ellen Lee Postdoctoral Scholar in Physics at Caltech. Hoadley works with Christopher Martin, professor of physics at Caltech and the former principal investigator of GALEX, which operated from 2003–13, scanning the skies in ultraviolet light.

"We think this object represents a late stage of these transient events, when the dust finally clears and we have a good view," Hoadley says. "But we also caught the process before it was too far along; after time, the nebula will dissolve into the interstellar medium, and we would not be able to tell anything happened at all."

"It's like catching sight of a baby when it first walks," says Don Neill, a research scientist at Caltech and a GALEX team member. "If you blink, you might miss it."

Twists and Turns in the Case of the Blue Ring

Mark Seibert, an astrophysicist with the Carnegie Institution for Science and a member of the GALEX team, was one of the first to find the Blue Ring Nebula in GALEX data in 2004. He remembers a lot of head scratching during those early days. "Every time we thought we had this thing figured out, something would tell us 'No, that's not right,'" he says. "That's a scary thing as a scientist. But I also love how unique this object is, and the effort that so many people put in to figure it out."

Over the past 16 years, the team has used several telescopes to narrow in on the cause of the mysterious ring. In 2006, they used Caltech's Hale Telescope at Palomar Observatory, near San Diego, and the W. M. Keck Observatory, in Hawaii, to find evidence for a shock wave around the star. The presence of such a shock wave suggests that a cloud of gas had been ejected into space. For a while, they even thought that the star could be tearing up an unseen planet, but, in 2017, data from the Habitable Zone Planet Finder on the Hobby-Eberly Telescope in Texas confirmed there was no compact object orbiting the star.

Archival data from NASA's Spitzer Space Telescope and the agency's Wide-field Survey Explorer (WISE), together with other past infrared observatories, help establish that the star was circled by a disk of dust. Additional data played a role in cracking the case as well, including that from a citizen science group called the American Association of Variable Star Observers (AAVSO).

All of the puzzle pieces started to fall into place when the GALEX team asked Brian Metzger, a theoretical astrophysicist at Columbia University, to join the effort.

"It wasn't just that Brian could explain the data we were seeing; he was essentially predicting what we had observed before he saw it," said Hoadley. "He'd say, 'If this is a stellar merger, then you should see X,' and it was like, 'Yes! We see that!'"

The astronomers say that the story of the Blue Ring Nebula began a few thousand years ago with a star about the mass of our sun and a smaller star that was in orbit around it. As the sun-like star aged, it puffed up and its outer layers inched closer to the companion. The smaller star syphoned material off the larger star, which spiraled around the small star in a disk, but ultimately the small star was consumed by its partner. The collision of the two stars launched a cloud of debris that was sliced in two by the small star's disk of gas. This created the two cone-shaped clouds of debris.

As the debris flew outward, it swept up gas, creating a shock wave. The shock wave heated up hydrogen molecules in the debris, which caused them to fluoresce in ultraviolet light. This fluorescing process is similar to what caused the glowing of a long tail streaming behind the star Mira, famously imaged by GALEX in 2007.

Martin, who first began working on ultraviolet sky surveys nearly four decades ago, says that while this particular mystery took longer than expected to solve, he is not surprised that GALEX is still leading to new finds. "Whenever you survey the sky at new wavelengths, you inevitably get new discoveries years later and beyond," he says.

The study, "A blue ring nebula from a stellar merger several thousand years old," was funded by the National Science Foundation, NASA, the Heising-Simons Foundation, and the Robert Martin Ayers Sciences Fund. Other authors include Andrew McWilliam of the Carnegie Institution for Science, Ken Shen of UC Berkeley, Gudmundur Stefansson of Princeton University, Andrew Monson of Pennsylvania State University, and Bradley Schaefer of Louisiana State University.

The Jet Propulsion Laboratory (JPL), a division of Caltech, managed the GALEX mission for NASA's Science Mission Directorate. The mission was developed by NASA's Goddard Space Flight Center in Greenbelt, Maryland, under the Explorers Program. JPL also managed the Spitzer and WISE missions. In September 2013, NASA reactivated the WISE spacecraft with the primary goal of scanning for near-Earth objects, or NEOs, and the mission and spacecraft were renamed NEOWISE.