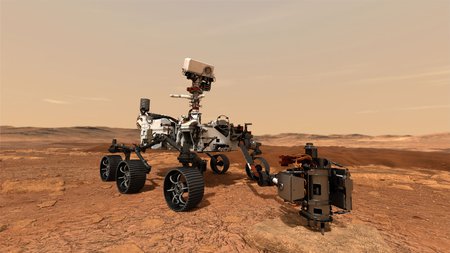 The largest, most advanced rover NASA has sent to another world touched down on Mars Thursday, after a 203-day journey traversing 293 million miles. Confirmation of the successful touchdown was announced in mission control at the Jet Propulsion Laboratory, which Caltech manages for NASA, at 3:55 p.m. EST (12:55 p.m. PST).

Packed with groundbreaking technology, the Mars 2020 mission launched July 30, 2020. The Perseverance rover mission marks an ambitious first step in the effort to collect Mars samples and return them to Earth.

"This landing is one of those pivotal moments for NASA, the United States, and space exploration globally—when we know we are on the cusp of discovery and sharpening our pencils, so to speak, to rewrite the textbooks," says acting NASA Administrator Steve Jurczyk. "The Mars 2020 Perseverance mission embodies our nation's spirit of persevering even in the most challenging of situations, inspiring and advancing science and exploration. The mission itself personifies the human ideal of persevering toward the future and will help us prepare for human exploration of the Red Planet." 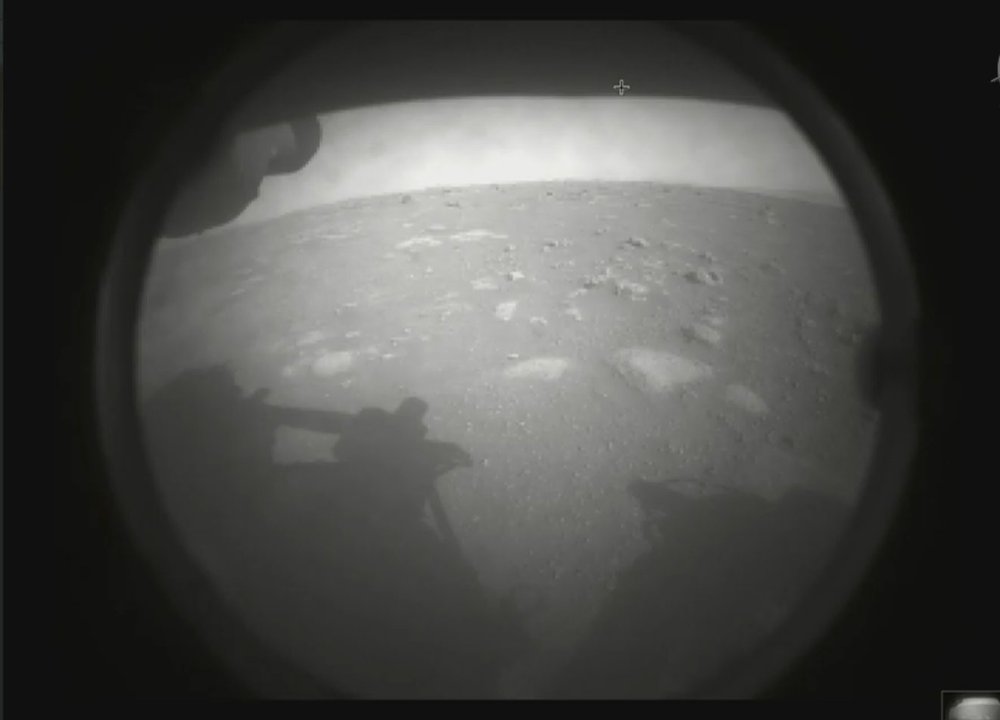 One of the first images of the Martian surface sent back to Earth by the Perseverance rover. Credit: NASA-JPL/Caltech
Image Lightbox 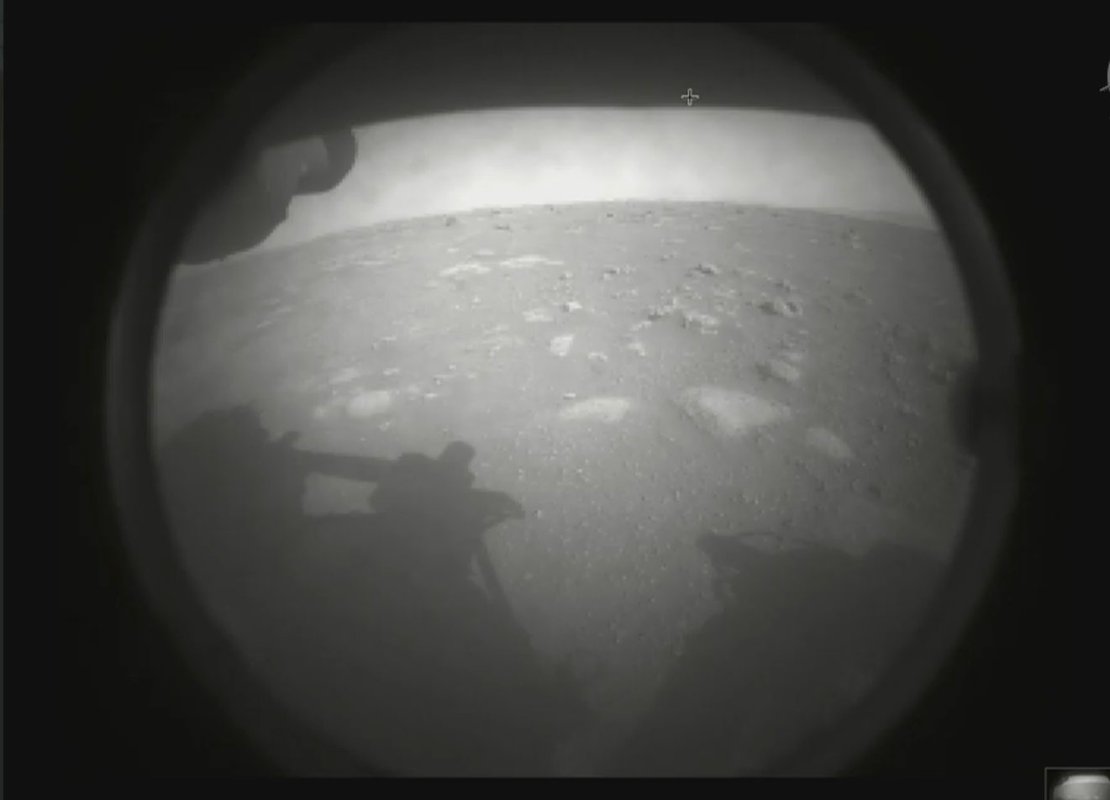 One of the first images of the Martian surface sent back to Earth by the Perseverance rover.
Credit: NASA-JPL/Caltech
Download Full Image

About the size of a car, the 2,263-pound rover will undergo several weeks of testing before it begins its two-year science investigation of Mars' Jezero crater. While the rover will investigate the rock and sediment of Jezero's ancient lakebed and river delta to characterize the region's geology and past climate, a fundamental part of its mission is astrobiology, including the search for signs of ancient microbial life. To that end, the Mars Sample Return campaign, being planned by NASA and ESA (European Space Agency), will allow scientists on Earth to study samples collected by Perseverance to search for definitive signs of past life using instruments too large and complex to send to the Red Planet.

Ken Farley, Caltech's W. M. Keck Foundation Professor of Geochemistry and the mission's project scientist, has said that the dream of bringing samples from Mars back to Earth goes back decades. The knowledge gained through the mission could change our understanding of the origins of life, he has explained.

"We marvel at the technology that makes landing safely on another planet possible, anticipate the transformative science to come, and, most of all, celebrate the human ingenuity that inspires us across our home planet," says Caltech president Thomas F. Rosenbaum, Sonja and William Davidow Presidential Chair and professor of physics.

Some 28 miles (45 kilometers) wide, Jezero crater sits on the western edge of Isidis Planitia, a giant impact basin just north of the Martian equator. Scientists have determined that 3.5 billion years ago the crater had its own river delta and was filled with water.

Equipped with seven primary science instruments, the most cameras ever sent to Mars, and its exquisitely complex sample caching system—the first of its kind sent into space—Perseverance will scour the Jezero region for fossilized remains of ancient microscopic Martian life, taking samples along the way.

"Perseverance is the most sophisticated robotic geologist ever made, but verifying that microscopic life once existed carries an enormous burden of proof," says Lori Glaze, director of NASA's Planetary Science Division. "While we'll learn a lot with the great instruments we have aboard the rover, it may very well require the far more capable laboratories and instruments back here on Earth to tell us whether our samples carry evidence that Mars once harbored life."

Paving the Way for Human Missions

"Landing on Mars is always an incredibly difficult task and we are proud to continue building on our past success," says Michael Watkins, Caltech vice president for the Jet Propulsion Laboratory and professor of aerospace and geophysics. "But, while Perseverance advances that success, this rover is also blazing its own path and daring new challenges in the surface mission. We built the rover not just to land but to find and collect the best scientific samples for return to Earth, and its incredibly complex sampling system and autonomy not only enable that mission, they set the stage for future robotic and crewed missions."

On the surface of Mars, Perseverance's science instruments will have an opportunity to scientifically shine. Mastcam-Z, of which Caltech's Bethany Ehlmann, professor of planetary science, is a co-principle investigator, is a pair of zoomable science cameras on Perseverance's remote sensing mast, or head, that creates high-resolution, color 3D panoramas of the Martian landscape. Also located on the mast, the SuperCam, which Caltech's Woody Fischer has helped develop, uses a pulsed laser to study the chemistry of rocks and sediment and has its own microphone to help scientists better understand the property of the rocks, including their hardness.

Currently attached to the belly of Perseverance, the diminutive Ingenuity Mars Helicopter is a technology demonstration that will attempt the first powered, controlled flight on another planet.

Project engineers and scientists will now put Perseverance through its paces, testing every instrument, subsystem, and subroutine over the next month or two. Only then will they deploy the helicopter to the surface for the flight test phase. If successful, Ingenuity could add an aerial dimension to exploration of the Red Planet in which such helicopters serve as a scouts or make deliveries for future astronauts away from their base.

Once Ingenuity's test flights are complete, the rover's search for evidence of ancient microbial life will begin in earnest.

More About the Mission

A primary objective for Perseverance's mission on Mars is astrobiology research, including the search for signs of ancient microbial life. The rover will characterize the planet's geology and past climate and be the first mission to collect and cache Martian rock and regolith, paving the way for human exploration of the Red Planet.

Subsequent NASA missions, in cooperation with ESA, will send spacecraft to Mars to collect these cached samples from the surface and return them to Earth for in-depth analysis.

The Mars 2020 Perseverance mission is part of NASA's Moon to Mars approach, which includes Artemis missions to the Moon that will help prepare for human exploration of the Red Planet.