A Tale of Planetary Resurrection 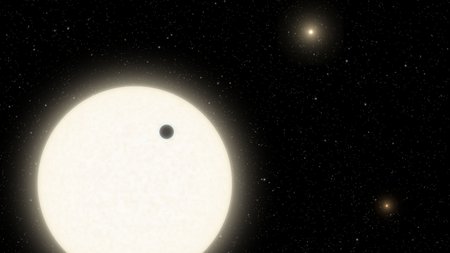 This artist's concept shows the planet KOI-5Ab transiting across the face of a sun-like star, which is part of a triple-star system located 1,800 light-years away in the constellation Cygnus. Credit: Caltech/R. Hurt (IPAC) 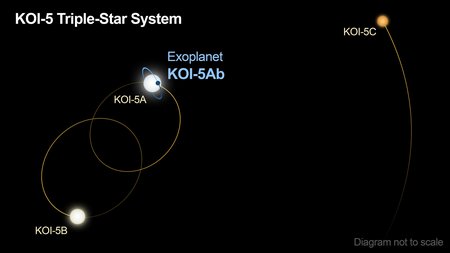 The KOI-5 star system consists of three stars, labeled A, B, and C in this diagram. Star A and B orbit each other every 30 years. Star C orbits stars A and B every 400 years. The system hosts one known planet, called KOI-5Ab, which was discovered and characterized using data from NASA's Kepler and TESS (Transiting Exoplanet Survey Satellite) missions, as well as ground-based telescopes. KOI-5Ab is about half the mass of Saturn and orbits star A roughly every five days. Its orbit is titled 50 degrees relative to the plane of stars A and B. Astronomers suspect that this misaligned orbit was caused by star B, which gravitationally kicked the planet during its development, skewing its orbit and causing it to migrate inward. Credit: Caltech/R. Hurt (IPAC)

This artist's concept shows the planet KOI-5Ab transiting across the face of a sun-like star, which is part of a triple-star system located 1,800 light-years away in the constellation Cygnus. Credit: Caltech/R. Hurt (IPAC)
Tags:
astronomy & physics

Shortly after NASA's Kepler mission began operations back in 2009, it identified what was thought to be a planet about the size of Neptune. Called KOI-5Ab, the planet, which was the second new planet candidate to be found by the mission, was ultimately forgotten as Kepler racked up more and more planet discoveries. By the end of its mission in 2018, Kepler had discovered a whopping 2,394 exoplanets, or planets orbiting stars beyond our sun, and an additional 2,366 exoplanet candidates, including KOI-5Ab.

"KOI-5Ab fell off the table and was forgotten," says Ciardi, who presented the findings at a virtual meeting of the American Astronomical Society (AAS). By 2014, Ciardi and other researchers had used the W. M. Keck Observatory in Hawaii, Caltech's Palomar Observatory near San Diego, and Gemini North in Hawaii to show that the star circled by KOI-5Ab is one member of a triple-star system called KOI-5. But they were not sure if the KOI-5 system actually hosted a planet or if they were seeing an erroneous signal from one of the two other stars.

Then, in 2018, TESS came along. Like Kepler, TESS looks for the blinking of starlight that comes when a planet crosses in front of, or transits, a star. TESS observed a portion of Kepler's field of view, including the KOI-5 system. Sure enough, TESS also identified KOI-5Ab as a candidate planet (though TESS calls it TOI-1241b). TESS, like Kepler, found that the planet orbited its star roughly every five days. But at that point, it was still not clear if the planet was real.

"I thought to myself, 'I remember this target,'" says Ciardi, after seeing the TESS data. He then went back and reanalyzed all the data, including that from the California Planet Search, led by Caltech professor of astronomy Andrew Howard. The California Planet Search uses ground-based telescopes, including the Keck Observatory, to search for the telltale wobble in a star that occurs when a planet circles around it and exerts a gravitational tug.

"If it weren't for TESS looking at the planet again, I would never have gone back and done all this detective work," says Ciardi.

Jessie Dotson, the Kepler/K2 project scientist at NASA Ames Research Center, says, "This research emphasizes the importance of NASA's full fleet of space telescopes and their synergy with ground-based systems. Discoveries like this one can be a long haul."

Together, the data from the space- and ground-based telescopes helped confirm that KOI-5Ab is a planet. KOI-5Ab is about one half the mass of Saturn and orbits a star (star A) with a relatively close companion (star B). Star A and star B orbit each other every 30 years. A third gravitationally bound star (star C) orbits stars A and B every 400 years.

The combined data set also reveals that the orbital plane of the planet is not aligned with the orbital plane of the second inner star (star B) as might be expected if the stars and planet all formed from the same disk of swirling material. Triple-star systems, which make up about 10 percent of all star systems, are thought to form when three stars are born together out of the same disk of gas and dust.

Astronomers are not sure what caused the misalignment of KOI-5Ab but speculate that the second star gravitationally kicked the planet during its development, skewing its orbit and causing it to migrate inward.

Future instruments, such as the Palomar Radial Velocity Instrument (PARVI) at the 200-inch Hale Telescope at Palomar and the Keck Planet Finder at Keck, will open up new avenues for better answering these questions.

"Stellar companions may partially quench the process of planet formation," says Ciardi. "We still have a lot of questions about how and when planets can form in multiple-star systems and how their properties compare to planets in single-star systems. By studying the KOI-5 system in more detail, perhaps we can gain insight into how the universe makes planets."