I am interested in the evolution of galaxies, particularly galaxy evolution that is hidden from view in the optical band because the galaxies are heavily dust obscured. Long ago with the IRAS survey, we found extremely dusty galaxies in the local universe. Using the Spitzer Space Telescope my collaborators and I have found a corresponding kind of galaxies, Dust Obscured Galaxies, or DOGs, which are quite common at high redshifts (z>2). The DOGs are a substantial contributor to the energy output in the universe a few Gyr after the big bang. The questions I am trying to address revolve around where DOGs fit into the bigger picture of galaxy evolution, whether this dusty phase is a part of the life experience of every galaxy, and how much of the star formation in the universe is hidden behind a veil of dust. 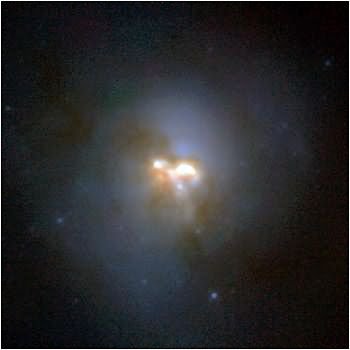 The platforms I use include space telescopes (most notably the Spitzer Space Telescope, which happens to be the best Observatory NASA has ever launched, and for which I am the Director of the Science Center), and the ground-based facilities of Caltech – the Keck telescopes, the 200 inch telescope at Palomar, the CSO and CARMA. Part of my interest is in building infrared instrumentation  for Caltech's ground-based telescopes. In the past I have been involved in several instruments that are used on the 200 inch, as well as the Near Infrared Camera (NIRC) for Keck I and the Near Infrared Camera 2 (NIRC2 for Adaptive Optics observations) on Keck II. Currently, with Keith Matthews, the infrared instrumentation guru here at Caltech, I am involved in building a Near Infrared Echelle Spectrometer (NIRES) for Keck. This instrument will observe a target simultaneously from 1.0 – 2.4µm at a spectral resolution of ~2500. NIRES is designed to study the faintest objects that are reachable with the Keck telescopes. The projects I'm involved in are good ones for graduate students, particularly students who want to be involved in early commissioning and usage of a new capability for the Keck Telescope.

Outside of astronomy I amuse myself with music (mostly old war-horse operas), tennis, and trying to learn to play the cello (so I can rival YoYo Ma).