The major focus of my current research is the Cosmic Evolution Survey (COSMOS) which focuses on the assembly and evolution of galaxies and their central black holes (AGN) at redshifts from 0.2 to 6. This survey was started in 2004 with 600 orbits on HST to image a 2 square-degree equatorial field, but it now includes imaging and spectroscopy from virtually every large space and ground-based telescope. Over a million galaxies are detected out to redshift 6 when the universe was only a billion years old; the survey is therefore equivalent to the Sloan survey of the local universe but covering the period of maximum galaxy and AGN evolution at z > 1. 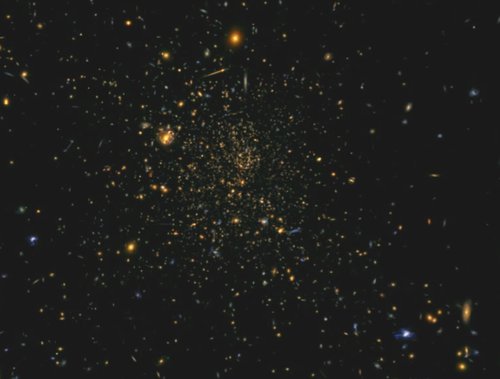 My major personal interest has been in mapping the large scale structures for the first time at high redshift and relating galaxy properties and their rates of evolution to their environments. The dark matter structures  have been mapped in COSMOS using weak lensing, while the baryonic matter distribution is revealed by the overdensity of galaxies. We are now finding that the masses of the galaxies and the ages of their stellar populations are strongly correlated with the large scale structures. Such environmental correlations were anticipated from local universe studies I had been involved in earlier which showed greatly enhanced star formation rates in merging and interacting IR luminous galaxies. However, in the nearby universe these activities are relatively rare.

In the future, I look forward to extending such work into the epoch of reionization using the on-coming ALMA, TMT and JWST facilities. These facilities will of course provide better sensitivity – more importantly they will provide the spatial resolution on high redshift galaxies needed to really understand the physical processes most important to the early assembly and evolution.