Submillimeter Spectroscopy of the Interstellar Medium

I have worked in this field for many years, having developed the detectors (SIS and HEB) for the submillimeter, now used in ALMA and HIFI on Herschel, which are two of the biggest projects in astronomy today. I am the Director of the Caltech Submillimeter Observatory (CSO) on Mauna Kea, Hawaii, and I use it for studies of molecules and atoms in the interstellar medium. Some of the important detections have been lines of interstellar carbon monoxide and atomic carbon. Amongst other effects we have shown that turbulence is prevalent throughout the interstellar medium and many of the phenomena observed are due to turbulence and possibly intermittency. Recently we have detected the 13CH+ molecule. It is the rotational ground-state  transition and is observed in absorption. Also there has been much work on deuterated molecules. For example, the triply deuterated version of ammonia has been detected! There is a process that drives deuterium, at the expense of hydrogen, into molecules in cold dense star-forming regions, thereby depleting the diffuse warm gas of deuterium and possibly resulting in too low a value for the D/H ratio. Besides the CSO, there is the HIFI instrument on board the European Space Agency Satellite, Herschel. I have worked on this project for many years and am the PI of the NASA HIFI project. The data is just about to come in from this exciting, recently launched satellite. We expect to see thousands of lines from each object observed and expect to obtain spectral lines of never before seen species. In particular we will learn about H2O, which is almost completely blocked by the Earth's atmosphere. 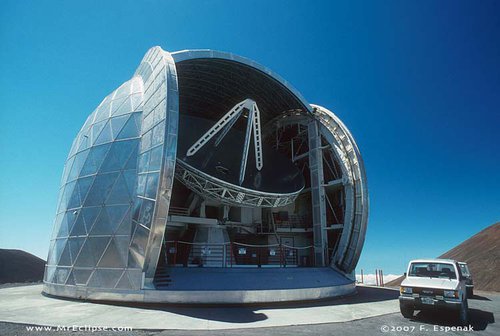